What Is a Face Mask?

What Is a Face Mask?

It’s an anthropological truism so trite it could be embroidered on a throw pillow: Masks don’t hide our true selves, but instead display them. As more and more of us don disposable face masks, tie scarves around our noses and chins, or improvise other forms of PPE, commentators have begun reading our mask choices as ways to re-signify and consolidate underlying identities marked by class or gender. But to understand what exactly the mask means in itself, let’s look to where the mask is not: US Vice President Mike Pence’s face.

Pence refused to wear a face mask when visiting coronavirus patients at the Mayo clinic, later saying that he wanted to have the opportunity to “speak to these researchers, these incredible health care personnel, and look them in the eye and say ‘thank you’” – an odd justification, since face masks do not cover their wearers’ eyes.

Perhaps, Pence was thinking of something like a suit of armor’s visor, such as the one worn by the ghost of Hamlet’s father, memorably but confusingly analyzed by Jacques Derrida in Specters of Marx. Derrida’s visor combines Louis Althusser’s theory of interpellation (in which the subject enters into power relations by reflexively answering a command addressed to nobody in particular by an unseen voice) and Michel Foucault’s theory of panopticism (in which power universalizes itself by becoming an omnipresent gaze, generalizing surveillance so that each subject feels and behaves, at any moment, like she may be being watched).

Derrida calls the visor – particularly the visor flipped up – a key sign of authority, since “even when it is raised, in fact, its possibility continues to signify that someone, beneath the armor, can safely see without being seen or without being identified.”[i] But Pence seems to eschew this “supreme insignia of power: the power to see without being seen,” in seeking to be seen, while looking at doctors and patients in the COVID-19 ward. For Derrida, the fact that you don’t have to use the visor to produce its powerful surveillance-effect makes visors into the exact opposite of masks, which, like PPE, only generate their magic power when worn.

Unfortunately, Derrida worked from a French translation of Hamlet.[ii] Shakespeare’s ghost wore a beaver, not a visor. A beaver is the lower portion of the helmet, which covered the nose and mouth and which flipped up to enable the wearer to drink or breathe; it, therefore, has the exact form of a face mask supposed to protect us from the new coronavirus. Still, just like the phantasmatic ghost with his flipped-up visor, Pence manifests his power by refusing to wear a mask, by making a bald-faced spectacle of himself for the camera. Donald Trump does the same, visiting a factory making N95 face masks while “Live and Let Die” blares in the background. Here, power is emblematized as the decision on when to put the mask on and when to take it off, a freedom that governments are increasingly restricting.

From March to May, over fifty countries made wearing a face mask (or an improvised homemade substitute) mandatory, including Venezuela, Qatar, Cameroon, Austria, and US cities like New York and Los Angeles. Simultaneously, the UK and Singapore have urged their citizens not to wear masks, and the US surgeon general tweeted “STOP BUYING MASKS” in the hopes of reserving protective equipment for healthcare workers.

One administration can do both: the French government described face masks as unnecessary when it went into quarantine, but has mandated universal face masks as it eased lockdown restrictions. (The earlier statement against wearing masks may have been a Platonic noble lie, intended to protect medically necessary masks from over-eager hoarders.) Although these contradictory assertions may cause citizens to lose trust in governments, they all share the goal of halting the play of visor-up, visor-down and to decide where the mask must be.

There’s nothing more uncertain than the position of the mask. Unlike that of the medical-grade masks reserved for hospital workers, the protective power of ordinary cloth masks has never been demonstrated. In fact, the WHO writes that “the wide use of masks by healthy people in the community setting is not supported by current evidence and carries uncertainties and critical risks.” Overconfident mask wearers, lulled by a false promise of security, may engage less often in important contagion-control behaviors like hand-washing; ill-fitting masks also encourage constant adjustment, leading to more contact between face and hands. Even though the mask promises safety, it may be a force of contagion.

Of course, the key word in the WHO’s statement is healthy. It seems reasonable that if unhealthy individuals wore masks (or just stayed at home), the spread of the pandemic would decrease. But who is “healthy”? And who could tell? The coronavirus is an ontological monster, seemingly leaving no concrete or legible sign of its presence. We learn that the fever which gave COVID-19 its original name (remember when we called it “Wuhan city fever”?), and which we attempt to detect at airports with infrared scanners, is instead absent in many cases. Sometimes we watch for coronavirus infection by monitoring the loss of smell and taste, sometimes by looking for “corona toe,” with new symptoms emerging and disappearing overnight. And, of course, we hear over and over that the vast majority of infected bodies are asymptomatic. But how many: 25%? 50%? All these numbers have been reported. Visor or beaver? Up or down? Mask on or off? Whatever the case, the ambiguity generated around the mask maps perfectly onto the ambiguity generated around the virus.

We call this coronavirus novel, a word which I always mistakenly read first as fiction. There is something unreal about the coronavirus, something which is precisely fictum – the Latin for “made, crafted.” I don’t mean “made up,” or even “artificially produced,” but socially constructed from the bottom up. Governments and medical bodies, for example, easily shape infection rates by controlling access to testing, making diverse data available to suit the any political need. In this way, COVID-19 approaches the spectrality of Derrida’s visored ghost: no matter how much we stare at it, we cannot determine the degree to which it focuses its gaze upon us. Indeed, the harder we look, the more we mask it with our partial and provisional techniques of observing, and the more it eludes our gaze, thus increasing its transfixing power. Even without a gaze to behold us, the new coronavirus causes us to become more and more beholden to it.

In his original chapter on panopticism, Foucault gives masks the last word on contagion and power. Describing the origin of modern disciplinary power in the anti-plague quarantine measures of the 17th century, Foucault distinguishes between the literary tradition of the plague and its analytical obverse, the disciplinary and surveilling power to come. He associates the former with “masks that were put on and taken off” – the carnivalesque festival in which wearing and un-wearing masks allowed for the independent discovery and creation of identity – and the latter with “the assignment of each individual to his ‘true’ name, his ‘true’ place, his ‘true’ body, his ‘true’ disease”[iii] – a kind of forced unmasking, a brutalized return to a set of biological, geographic, and political coordinates, that is also a violent masking, since it overwrites the individual with a bureaucratic and constructed double, namely the entry in the medical records.

The alternative, for Foucault, lies beneath the mask: “bodies mingling together without respect, individuals unmasked, abandoning their statutory identity and the figure under which they had been recognized, allowing a quite different truth to appear.”[iv] (I’ll note that Foucault’s “unmasking” must mean putting on a mask, entering into the carnival by presenting yourself as precisely that which you are not.) Popular memes about proper face mask wearing equate the nose and mouth to a penis that threatens to ejaculate infection. Unimaginably, the face itself (the sign of Pence’s candor) has become tainted with taboo, its masking transforming it into an unprecedented genital organ. Psychoanalytically, the owner of the phallus should be the opposite of abject, but here cross-contamination between penetrative and penetrated organs makes the face of a suspected coronavirus carrier into a hyper-abject object, so debased that it escapes even sexual difference.

The current masking of the populace aims to paper over this obscene truth of bodies, their capacity to mutate beyond a predictable biological horizon. Against the arguments of the fashion press (like Vogue’s spectacular “Cloth Masks to Shop Now”), the face mask does not give us a canvas upon which we can demonstrate our creativity and uniqueness through our choices of patterns and styles. Instead, precisely in its uncertainty, it marks us as subjects of coronavirus, and, in turn, as subjects of those authorities that can appear, in televised briefings or publicized goodwill photoshoots, as those who can look us in the eye – directly, without the ghostly intermediary of the mask’s visoring. The face mask keeps our eyes wide open, so that we would be able to see how watched we are.

[i] Jacques Derrida, Specters of Marx: The State of the Debt, the Work of Mourning, and the New International, trans. Peggy Kamuf (New York: Routledge, 1994) 8.

[ii] In fact, Shakespeare scholars are themselves rather confused about the precise meaning of “beaver” in Shakespeare’s plays. For a fuller discussion of Derrida’s (mis?)translation of “beaver” as “visière,” see Nicholas Royle’s “Mole” in his The Uncanny (Manchester: Manchester University Press, 2003).

Simon Porzak is a writer and researcher based in the Netherlands. He studies the intersections of science and aesthetics, with a particular interest in opera, artificial intelligence, and bioengineering

Read More
The Purge and the Failure of Leftist Politics 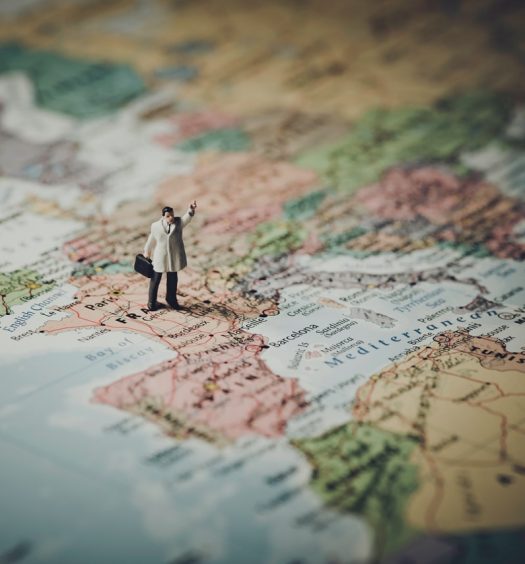