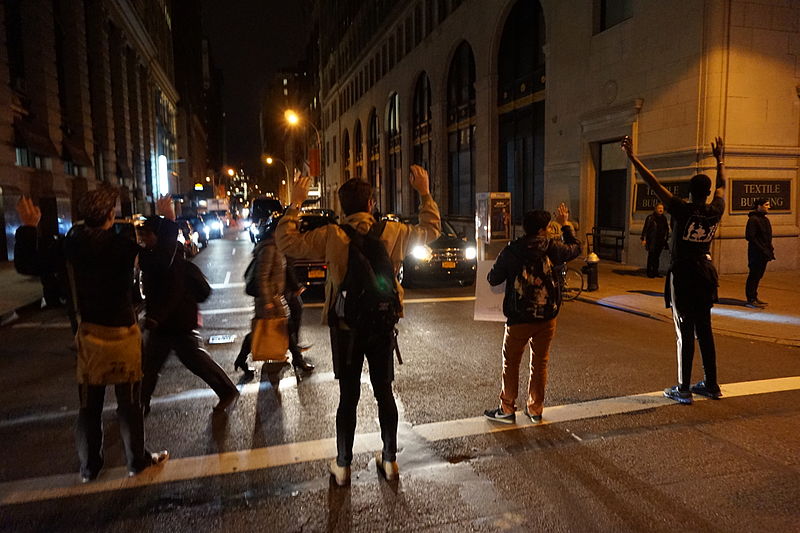 Violent protests like those in Ferguson happen more and more often. Are these merely irrational outbursts or symptoms of a new world order?

In August 2014, violent protests exploded in Ferguson, a suburb of St. Louis, after a policeman shot to death an unarmed black teenager suspected of robbery: For days, police tried to disperse mostly black protesters. Although the details of the accident are murky, the poor black majority of the town took it as yet another proof of the systematic police violence against them. In U.S. slums and ghettos, police effectively function more and more as a force of occupation, something akin to Israeli patrols entering the Palestinian territories on the West Bank; media were surprised to discover that even their guns are more and more U.S. Army arms. Even when police units try just to impose peace, distribute humanitarian help, or organize medical measures, their modus operandi is that of controlling a foreign population. “The Rolling Stone” magazine recently drew the conclusion that imposes itself after the Ferguson incident:

“Nobody’s willing to say it yet. But after Ferguson, and especially after the Eric Garner case that exploded in New York after yet another non-indictment following a minority death-in-custody, the police suddenly have a legitimacy problem in this country. Law-enforcement resources are now distributed so unevenly, and justice is being administered with such brazen inconsistency, that people everywhere are going to start questioning the basic political authority of law enforcement.”

In such a situation, when police are no longer perceived as the agent of law, of the legal order, but as just another violent social agent, protests against the predominant social order also tend to take a different turn: that of exploding “abstract negativity” – in short, raw, aimless violence. When, in his “Group Psychology”, Freud described the “negativity” of untying social ties (Thanatos as opposed to Eros, the force of the social link), he all too easily dismissed the manifestations of this untying as the fanaticism of the “spontaneous” crowd (as opposed to artificial crowds: the Church and the Army). Against Freud, we should retain the ambiguity of this movement of untying: it is a zero level that opens up the space for political intervention. In other words, this untying is the pre-political condition of politics, and, with regard to it, every political intervention proper already goes “one step too far”, committing itself to a new project (or Master-Signifier).

Do they not hit the innocent?

Today, this apparently abstract topic is relevant once again: The “untying” energy is largely monopolized by the New Right (the Tea Party movement in the U.S., where the Republican Party is increasingly split between Order and its Untying). However, here also, every fascism is a sign of failed revolution, and the only way to combat this Rightist untying will be for the Left to engage in its own untying – and there are already signs of it (the large demonstrations all around Europe in 2010, from Greece to France and the UK, where the student demonstrations against university fees unexpectedly turned violent). In asserting the threat of “abstract negativity” to the existing order as a permanent feature which can never be aufgehoben, Hegel is here more materialist than Marx: In his theory of war (and of madness), he is aware of the repetitive return of the “abstract negativity” which violently unbinds social links. Marx re-binds violence into the process out of which a New Order arises (violence as the “midwife” of a new society), while in Hegel, the unbinding remains non-sublated.

Are such “irrational” violent demonstrations with no concrete programmatic demands, sustained by just a vague call for justice, not today’s exemplary cases of what Walter Benjamin called “divine violence” (as opposed to “mythic violence”, i.e. the law-founding state violence)? They are, as Benjamin put it, means without ends, not part of a long-term strategy. The immediate counter-argument here is: but are such violent demonstrations not often unjust, do they not hit the innocent?

If we are to avoid the overstretched Politically Correct explanations according to which the victims of divine violence should humbly not resist it on account of their generic historical responsibility, the only solution is to simply accept the fact that divine violence is brutally unjust: It is often something terrifying, not a sublime intervention of divine goodness and justice. A left-liberal friend from the University of Chicago told me of his sad experience: when his son reached high-school age, he enrolled him in a high school north of the campus, close to a black ghetto, with a majority of black kids, but his son was then returning home almost regularly with bruises or broken teeth – so what should he have done? Put his son into another school with the white majority or let him stay? The point is that this dilemma is wrong: The dilemma cannot be solved at this level since the very gap between private interest (safety of my son) and global justice bears witness to a situation which has to be overcome in its entirety.

Antiwork and Its Enemies

Read More
Antiwork and Its Enemies
6 years ago
Patrick Moore